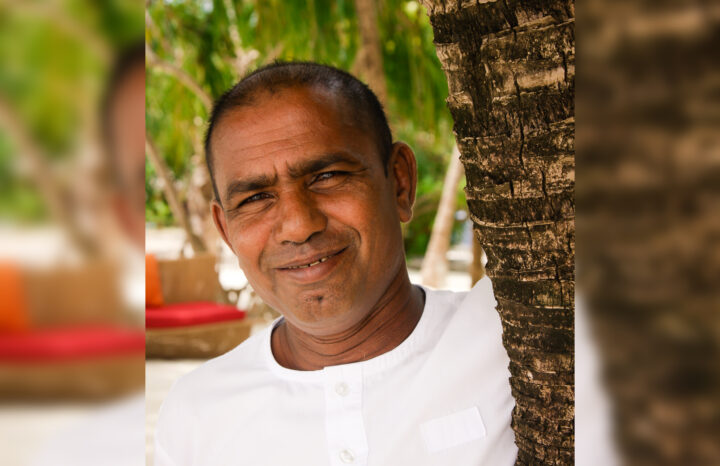 Careers: Mohamed Abdul Hameed – A hero that rose from the waves

The Hotelier Maldives Careers’ section has brought many a story of people whose careers are inspirational, uplifting and a guide to those who seek such aspirations. This story, though inspirational, is contrastingly different. It is a story of sacrifice, a story of courage, but most of all a story of humanity.

Mohamed Abdul Hameed is a simple man, with a smile that lights up everyone around him. It is no coincidence that he works at the front office, and is among the first line of men to greet guests and bid them farewell. Working as a Senior Porter, transporting guests around the island, Abdul is admired by his colleagues and loved by guests themselves.

Abdul started his career at Kanuhura, and has been loyal to the property ever since. It is no surprise that when we asked the management for an exemplary staff to feature in the career’s section, they instantly recommended Abdul.

In true Kanuhura fashion, our interview was set in one of the adjoining islands to Kanuhura, Masleggi Hura, where guests go on private retreats for picnic lunches and relaxation. As we set off on the little boat across the lagoon adjoining the three sister islands, Abdul reminisced on the 15 years he had spent on the island. My interest in the rich fields of sea grass in the lagoon sparked a conversation on the trip where Abdul told me stories of the growing number of turtles that come to the three islands regularly.Landing on Masleggi Hura, we quickly made way to the beautifully laid picnic spread with fresh fruit and cold beverages to quench the thirst from the hot afternoon sun. Today, Abdul was too a guest, and the resort staff treated him as one, but he had a hard time fitting into the shoes of a guest, as we sat to start the interview.Little did I know our story would take a turn to one that would leave me in tears, and full of admiration and respect, as most career pieces I do often don’t. Abdul reminisced on how he started in the Garden making way to the front office, and how his happiest memories are of seeing youngsters who work alongside him, progress the ranks of the resorts, some who are even Managers now.

The story made a drastic turn when I asked Abdul if he experienced anything extraordinary during his career. His normal cheerful self reclined a bit and with a deep breath he took me to a day in 2004, December 26 to be exact, when he told of a morning his life changed.

“I was out on a fishing trip with a guest, it was really early in the morning, just after breakfast and the boat suddenly swayed in the most peculiar manner. We knew there was something odd about the tide, but being a Maldivian, odd currents were not anything I was afraid of,” he told. “The guest knew it wasn’t a normal current and wanted to head back, so we hurried back to the island, where news of an earthquake had already reached the island, and emergency protocols were quickly coming into effect”.Almost all guests were already gathered for breakfast so rounding up everyone around the island wasn’t too much of a task. Abdul recalls, that just to be safe, he took a stroll around the island, oblivious to the impending danger that loomed moments later. A tsunami wasn’t something the Maldives had ever experienced, and it was something nobody saw coming.

As Abdul took to round up any remaining guests on the island, the swells hit out of nowhere. He was almost by the over water villas, and the tide had already succumbed a good portion of the island. It was total chaos, he says, not knowing what to do or what was happening.In the midst of it all, he saw a lonesome mother and daughter, in the middle of the dock leading to the water bungalows. Without even thinking of what might happen, he quickly made his way through the murky swell, to grab the couple to safety.

“It was water up to the chest, the deck wasn’t visible, nor was anything else amidst the murkiness in the swells. I knew how to navigate on the deck, but I also knew that the couple wouldn’t have the faintest idea what was the deck or what was the lagoon, so I knew I could not just leave them.” Abdul recalled.

He took the toddler on his shoulders and grabbed the mother, and made his way carefully in the surging swell to safety. It was a chaotic day and everything was happening in a spur, and Abdul on an island resort, secluded from his family with no means of communication had to make sure his family on the neighboring island of Kurendhoo were safe as well. The days following were of recovery and getting things back to the way it was.

It was a long journey for Maldives to recover from the tragedy brought by the 2004 Indian Ocean Tsunami, but luckily for Abdul, his family was safe, his island sustained minimal damage, and Kanuhura was back in operation within the year.Abdul had no idea his deed of rescuing the couple had much an impact, but a year later, he was asked by the General Manager to greet some guests at the jetty, and to his surprise, the guests, an entourage made up of a big family, came bearing flowers to Abdul. He was shocked, but later he realized it was the family of the couple, so indebted to Abdul’s heroic deed, that had come to thank him.

Abdul said: “It wasn’t an extraordinary thing I did, anyone would have done the same. It was an act of humanity”.This act of humanity, one of heroic proportions had earned him a friend for life, who visits him and his family at least once a year since. The grateful family has also sponsored the education of Abdul’s eldest who is now completing her postgraduate studies.

A story of courage, a story of humanity, and a story of selflessness, that has exemplified the colors of Maldivian true hospitality, embodied by this cheerful employee at Kanuhura; Mohamed Abdul Hameed. 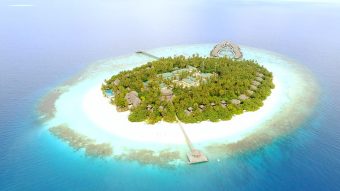 Outrigger Enterprises Group has announced that the brand’s official name has changed to Outrigger Hospitality Group in unison with a company-wide initiative that restructures its multi-branded portfolio. Further solidifying its position as a worldwide leader in the beach resort industry, Outrigger’s corporate name change provides the brand, clarity and structure for the strategic growth of […] 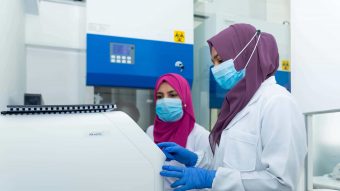 Mediflex Laboratories – on 20th December 2020, Medtech  launched its most recent services and opened its doors to the public at the capital city of Maldives, Male’.  Their very first, state of the art laboratory is situated conveniently right opposite Thaajuddeen School on Kanba Aisa Rani Hingun, on the West Side of the island, right […] 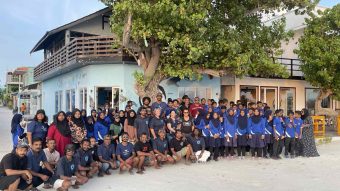 Local tour company Secret Paradise, joined forces with the community of K Guraidhoo to recognise World Clean-Up Day. World Clean-Up Day is a global social action program that is held annually to tackle the global solid waste problem. Each year on the 17th of September volunteers from across the world in over 191 countries come […]