Located in South Ari Atoll, Diamonds Thundufushi Beach and Water Villas exude an elegance not common in the reputed tourism destination which is the Maldives. Rebranded, refurbished and new additions added to existing structures on the resort, Thundufushi successfully blends vernacular architectural elements with a stylized thread of rooms resembling diamonds in the Indian Ocean.

It takes a thirty five minute flight from Hulhule’ to reach Diamonds Thundufushi Beach and Water Villas, in South Ari Atoll. The island sits at the end of a large, striking lagoon, and what is readily apparent from the landing platform, apart from the greenery of the island are the over water villas, white and brilliant, in the sunlight.

The resort began development in the late 80s and opened in 1990 and has remained for the most part untouched by the vagaries of time. “At the time we used cement, coral, and white sand to build walls, and wood from coconut palms for columns,” says Mohamed Hashim, the general manager of the resort who has been with Thundufushi for over twenty four years. “If you were to remove the cement from these walls, you’d see the coral,” he says. They had initially wanted to incorporate a Maldivian style and coral was widely used as building material in local architecture before the practice was banned. The exposed coral, bordered by white painted cement and concrete, is observed in various structures of the resort. The structures seem to exude a sort of timelessness, as if belonging neither in the contemporary world nor the old.

Thundufushi’s original structures have remained intact, undergoing only a few modifications. The internal ceilings of the land villas were changed from bamboo to wood, and the shape of the roofs were altered to that of a pyramid. This took place in 2005, under the supervision of Italian architect Ettore Mocchetti, who also made changes to the furnishings and the flooring of these rooms. The original brown tiles of the rooms were overlaid by wood, and the villas’ bathroom flooring was changed to terrazzo.

The restaurant, reception area and staff quarters were touched by change as well. A wooden deck was extended on one side of the restaurant to provide extra seating. The original reddish brown tiling of the restaurant has stayed however, as has its roof. Its steep, slanted ceilings are painted white to go with the décor of the resort.

Five additional beach villas were constructed in 1994. All the beach villas are set around the island in a horse shoe pattern. These villas are rectangular, with dark brown Decrabond tile roofs, and the older villas’ white walls reveal, in their hearts, the original coral structures within. Inside, they maintain the white theme, interspersed with touches of brown; the pyramid shaped ceiling is white, the beams are dark wood. The wardrobes and mini bar cabinet are fashioned in such a way that they double up as parts of the wall that frame the main door and the door to the bathroom. This concept is the brainchild of Mocchetti. The rooms have timber flooring, which is indistinguishable from the shade of the furniture. A king sized bed, flanked by two lamps on end tables is on one end of the room. Opposite it, on the other end a mirror takes up the place of a TV, which the hotel has seemingly eschewed. Underneath the mirror is a desk, with an iPod docking station. The rooms are elegant, simple, unpretentious. White curtains block the glass doors that lead out to the wooden deck, where you can gaze at the shimmering expanse of the ocean.

The water villas are without question the most striking aspect of the resort. They meander into the lagoon, resembling a delicate vine from above. The villas were designed by Mocchetti and constructed entirely out of timber imported from Malaysia. Construction began in 2010 and prominent local construction company Aima carried out the concrete work for the villas, which was conducted with great consideration for the environment. A barge was used to ferry the excavator during the concrete work. “This was expensive and time consuming but the clients did not want the corals to be harmed in any way,” says Mohamed Habeeb, the local contractor who constructed the water villas once Aima had finished with the concrete work. The villas were constructed on timber joists, on which plywood or cement boards were laid. Wall frames, prefabricated in Malaysia were then placed and the walls assembled. The walls’ exterior was clad in balau wood, which is able to withstand the elements, while meranti and camphor were used inside. The rafters for roofs were then placed, and overlaid with plywood, which in turn was covered with black paper roll on top of which shingles were laid. These roofs are strikingly different from those found in other resorts in the country which prefer thatch to add a local flavour.

Inside the 25 water villas the white theme is more prominent than in most beach villas. Their custom made rattan furnishings are all white, as are the walls, beams, ceilings. The brown timber flooring has a different design from the beach villas. The rooms have a canopy king size bed, a sofa bed, and a walk-in closet. Their roomy walk-in showers can be accessed from outside. An Apple iMac sits on a desk at the end of the room, offering a variety of films and music. Outside, the deck is spacious and overlooks the spectacular lagoon. Some water villas have Jacuzzis on the deck.  With their unique architecture, the water villas are places of solitude and privacy. They seem to be a microcosm with their own sense of aesthetics, connected to the structures on the rest of the island only by their thematic use of white

A Guide to Hospitality and Tourism Education in Maldives

Horology meets environmental conservation as the Patravi ScubaTec Maldives dive watch applauds Carl F. Bucherer’s long-standing partnership with the Manta Trust. The newest member of the Patravi ScubaTec family, the Maldives watch, was created to raise awareness of the Manta Trust and its outstanding commitment to preserving endangered manta rays in the Indian Ocean nation. […] 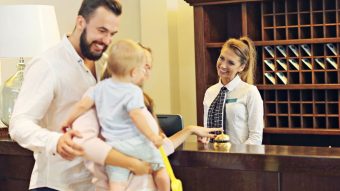