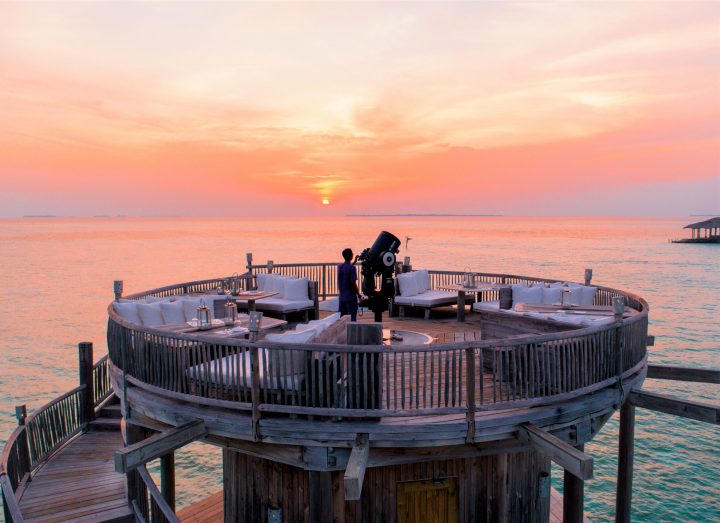 Top 7 Maldives’ Resorts to Stargaze at this Astronomy Day

The Maldives has some of the biggest skies in the world while the horizon is enveloped by Indian Ocean punctuated with idyllic paradise islands. Each remote atoll on this archipelago presents an ideal place to observe the universe. Starry nights in the Maldives’ far flung resorts, away from the bright city lights, are magical. Hotelier Maldives looks at some of the best places to stargaze in Maldives to mark International Astronomy Day on 15 May, an event celebrated twice a year, close to the first quarter moon of spring and fall with the latter falling on October 9.

Anantara Kihavah offers astronomy experiences at the country’s first ever observatory in the unpopulated Baa atoll in the middle of the Indian Ocean, in natural seclusion where the light pollution is at the lowest on the planet, ensuring a dazzling display for stargazers. With its proximity to the equator, the Maldives is truly an astronomer’s paradise and Anantara Kihavah is the perfect place for spectacular views of both the southern and northern skies. Home to one of the most powerful telescopes in the Indian Ocean, and the first water observatory in the Maldives, SKY is a unique cocktail bar where this telescope is installed. Here, guests can gaze upwards for a mesmerising natural light show. Journey through the constellations with a front-row seat to the heavens as night falls and the open roof deck of the bar opens to reveal the starry skies. Sip champagne and nibble on Asian inspired tapas, whilst absorbing knowledge imparted by the resort’s sky guru on this cosmic adventure as you gaze upon the stars, surrounded by the ocean.

Anantara’s neighbour Soneva Fushi resort also promises views of the heavenly celestial of Venus and Saturn and their moons. They host a 3D astronomy experience via a Meade telescope at its own observatory. Using this equipment, resident astronomers demonstrate the differences in distance between stars and planets. Such technology helps guests see the depth of field through the telescope making some objects appear closer. Telescopes at Soneva Fushi and its sister resort Soneva Jani in the Noonu atoll are the largest in the Indian Ocean.

Another remote resort Six Senses in Laamu atoll, has an in-house astronomer who sets up a telescope on the beach to invite you on a journey to the moon, the stars and the constellations. This is a complementary service, although couples are invited to sign up for private stargazing events with a bottle of prosecco. Mirihi in South Ari atoll also has a staff astronomer with a powerful telescope offering beach viewings each night. Meanwhile, Lily Beach also in South Ari, features a personal telescope in each of its water suites perfect for viewing the milky way as you recline on your bed.

There are many resorts away from the bright lights of Male’ and Gan that, in peak season, provide clear skies making for perfect stargazing conditions by the naked eye. At Medhufushi Island Resort in Meemu and Reethi Beach in Baa atoll, one does not need astronomy devices to appreciate the glorious night sky while grazing on incredible food under a canopy of stars.

This astronomy day, appreciate the wonders of the Maldives and its great open skies in one of the most remote stargazing locations on the planet. 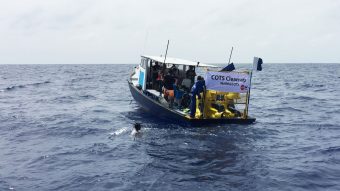 Environment: A Plague of Starfish

In mid-2015, a plague of coral-devouring starfish known as crown-of-thorns posed an existential threat to coral reefs, the bedrock of the Maldives’ thousand isles. 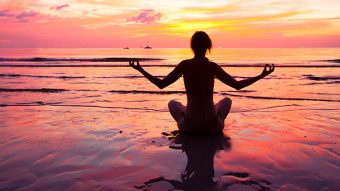 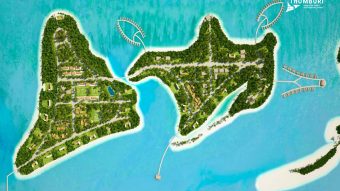 Maldives Marketing and Public Relations Company (MMPRC) is seeking interested parties to develop and operate beach hotels in the Thumburi guesthouse island. In an announcement on 18 December, the MMPRC invited potential investors to submit Expression of Interest “to take on lease land parcels allocated for the development, operation and maintenance of Beach Hotels” on the uninhabited island in Laamu atoll. The deadline for submission of signed documents is 26 February 2015.